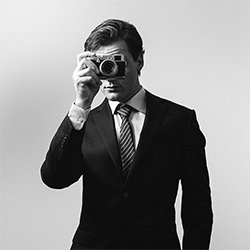 Peter-Paul de Meijer (born in 1987 in Sluis, the Netherlands) is combining a medical career with one in photography. Success in photography came early, being awarded the second prize in the prestigious Nike Sweetspot photo competition, shortly after starting photography in 2007. De Meijer's work was recognized by a number of outdoor magazines for whom he became a frequent contributor in the following years. During this period, he combined personal work with commercial assignments for various companies in the outdoors industry such as Red Bull, O'Neill and Motion Analysis.

More recently De Meijer has been shifting his photographic interests towards travel, adventurous sports and food photography. In 2011 he started an on-going collaboration with 3 star Michelin chef Sergio Herman. His work has been featured in a variety of editorial magazines, such as Traveller's World (Europe), Whitebook (China) and Powder Magazine (USA), amongst others.

De Meijer currently lives and works in Scheveningen and Sluis, the Netherlands.